A planeswalker in every Pack?!? Really? War of the Spark is a Firestarter

War of the Spark

War of the Spark

Although not a named mechanic, per se, Planeswalkers are clearly the stars of this show. There are an unprecedented number of planeswalkers in War of the Spark, and players will undoubtedly encounter them in more Booster Draft and Sealed Deck games than ever before. In recent history, planeswalkers have only appeared at mythic rare, so even if you’re a seasoned veteran, you might have run into them only sparingly.

The uncommon planeswalkers have only two abilities, and neither of them increases loyalty. Unless you find some other way to increase their loyalty (see “Proliferate,” below), these planeswalkers may have a small amount of time on the battlefield.

In fact, every planeswalker in this set has an ability that doesn’t involve loyalty at all. It could be a static ability. These abilities are always “on,” functioning no matter whose turn it is and no matter if you’ve activated any of that planeswalker’s loyalty abilities. Tibalt shuts down life gain as long as he’s on the battlefield. 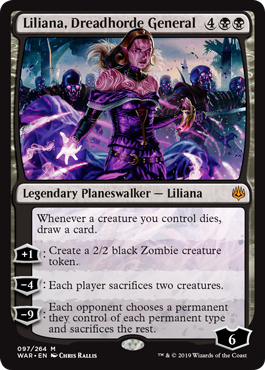 It could also be a triggered ability. These abilities trigger whenever their condition is met, again no matter whose turn it is and no matter if you’ve activated any of that planeswalker’s loyalty abilities. Liliana is happy to convert your dead into new cards, day or night.

The rules governing planeswalkers haven’t changed in this set. If you can get an opposing planeswalker to 0 loyalty, it will be put into its owner’s graveyard. Damage dealt to planeswalkers causes them to lose loyalty. You can attack them with your creatures. If you do, your opponents can block as normal. Some spells that deal damage may be able to target or otherwise hit planeswalkers. If a spell or ability says “any target,” it can target a creature, player, or planeswalker.

There’s one new keyword in War of the Spark, and it’s on the side of evil: amass. Remember Bolas’s little operation on Amonkhet? It was all designed to create an army of undead elite the likes of which Ravnica had never seen before. Known as the Dreadhorde, this army is now amassing on the streets of our fair city. Uh-oh. 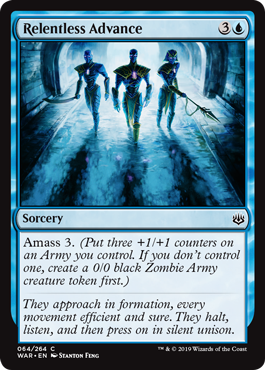 Amass empowers you to creature your own Zombie horde. Here’s how it works. When instructed to amass, ask yourself one simple question: does annihilating this world spark joy? Then, another question: do you control an Army? If you don’t already control an Army creature, you create a 0/0 black Zombie Army creature token. Then put a number of +1/+1 counters on one of your Armies equal to the number after amass. So, on an empty battlefield, Relentless Advance will give you a 3/3. 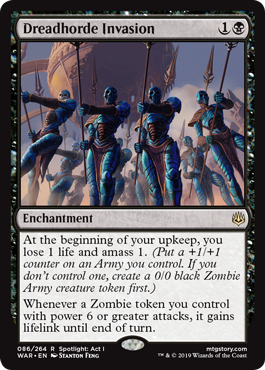 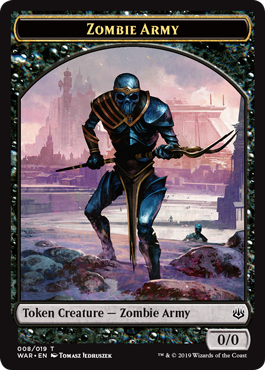 Amass was designed so you’d control one Army at most at any given time. But there are several ways around that. You could copy an Army you control, or maybe you control a creature with all creature types. If you happen to control more than one Army when you amass, you choose one of them to get all the +1/+1 counters. Although players can respond to the spell or ability that instructs you to amass, once you start to amass, no one can interrupt you. This is true even if you’re creating a new Army—no player can do anything while the Zombie Army creature token is still 0/0, before it gets the counters.

Even though the +1/+1 counters represent the growing numbers of Eternals joining your ranks, the Zombie Army creature token is still a single creature. It has two creature types: Zombie and Army. There are some great bonuses for Zombie tokens lurking in this set, including on Dreadhorde Invasion. Remember, they work with any Zombie token, not just ones created by amass.

War of the Spark features one prominent returning keyword: proliferate. Some fans may recall proliferate as a tool that spread destruction and decay. It was a Phyrexian innovation, after all. With all the planeswalkers and +1/+1 counters bouncing around, proliferate stands ready to serve a slightly different role in this war. 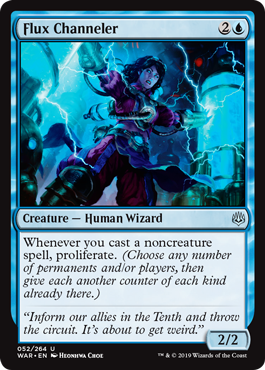 To proliferate, choose any number of players or permanents that have one or more counters on them. This can be any kind of counters: +1/+1 counters on creatures, loyalty counters on planeswalkers, even unusual things like time, charge, or doom counters. Counters that players get—including energy, experience, and poison—are all fair game. For each of the chosen players or permanents, give it another counter of the same kind it already had.

Remember that when you proliferate, you only put counters on the players and/or permanents you want to. If a creature your opponent controls has a +1/+1 counter, you can proliferate without fear of pumping it up.

There has been one small tweak to the proliferate rules this time around. Previously, if a player or permanent had more than one kind of counter, you’d choose one to add. Now, you just get all of them. Although unusual, this is most likely to happen with players. Say one of your opponents has both an energy counter and a poison counter. If someone proliferates, they will get both counters (one of each) or they’ll get neither, depending if the player who proliferated chose to include them.