Release weekend promo card“The dragon’s plans spanned millennia and his perception straddled centuries, a winding maze of possibility and circumstance and statistics and likelihood. Usually the dragon played the odds when shaping his decisions—but now, to manifest his needs, the dragon would need to be violent in his choices….” Hour of Devastation Prerelease story snippit..WOTC. 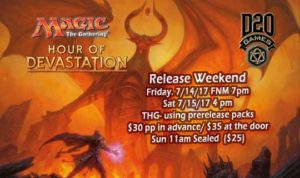 What: Sealed event (get 6 packs 4 Hours and 2 Amonkhet and build best 40 card deck.)  Three rounds, win a round, win a pack.  This event will be a double bonus because the packs you get for this event can also be used for participating in the hours of Devastation league.  The league will be an ongoing sealed, where each Thursday you can get a new pack to add for $3, provided you have done at least 3 matches the previous week.  We will do that league going on for the next 8 weeks, including a special league box for a limited number of players.