Magic Open House is mainly about bringing in new players to introduce to the game, and D20 Games is a great place to do it.  On Magic Open House day, Players can stop by  for fun, casual play that includes learn-to-play Magic events, free Welcome Deck tutorials for new players. It is a light and fun event.  And if you are one of those new players, you are super welcome.  Magic is a great game, (there is a reason that it’s stuck around for 25 years.)  It does take a good mind to master, but once you get the basics, it’s all in the cards.  (How to play magic) (More How to Play Magic)

(Depending on who shows up, we’ll do a mini how to play magic class at ~11) Players who participate in any aspect of the event (bring a friend, play in the tournament, or buy one of the Intro Decks)  receive a promo card, and the new players will receive a Welcome Deck. A casual League-style Standard tournament at 12 noon.  Entry to that event will be $5 and everybody will win a pack, PLUS a bunch of extra promos that I’ll scatter around to reward the brave new folks and thank those experienced players based on how much they are doing to help the new players feel welcome.(Experienced/regular players…this is a chance to pay it forward, and we need ya to help make new players feel invited and welcome.) 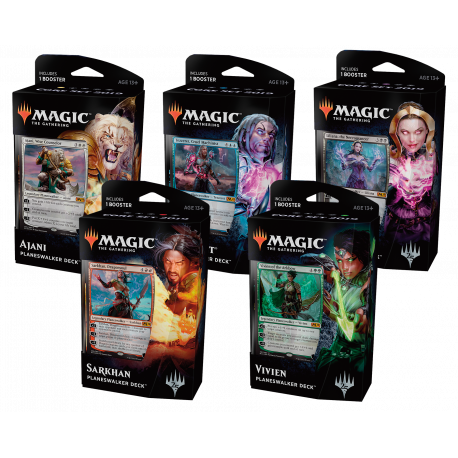 BONUS—Get a chance to buy one of the new Core 2019 Intro decks two weeks early!  Supplies are limited.  And we’ll throw in an extra booster pack with any other intro or challenger deck bought that day.

So we are doing something cool with Two-headed Giants at D20.  Two headed giants are one of our favorite Magic events because it gives people a chance to hang out together and share something they really like.  It’s great for buddies, couples and Kid Parent combos.  (The really cool thing is that its like tandem skydiving, as long as one player knows how to pull the cord, the other can come along for the fun, without worrying about making any mistakes…its a great way to share something with someone you care about.)  THG are each Saturday starting at 4 pm (except the First Saturday which is Date Night Magic) The Changes–3 different versions of THG each month (at least) Classic, Plus, and Premium…how does that sound? Every Saturday (except the first Saturday of the month and rare special events) we do two headed Giants as a team event.  The rotating different versions  will be: **I reserve to motify any of the events in the future, because, well, we came up with a cool idea and wanted to try it out.  The goal is to make it fun! Four color commanders are a’ co ming!   The new Commander 2016 Decks are coming out this week and they are creating a lot of excitement.  The big new mechanics are Partner, where two Commanders who both have Partner can be picked as if they were one to be your Commander.  Place one or two in play at a time.

Undaunted makes more the merrier, getting cheaper to cast  for each other player in the group.

It’s back…Screen Free week 2016!! See what happens when the tv’s, ipads, phones, and computers go into storage for a week, and what’s left.  Read more about this in The Case for Being Bored and the Case for Family Game Night

The Challenge:  Get your family to go one full week screen free!  (no videos, video games or computers except for work/homework, or phones except for, well, phone stuff-talking with each other.

The Prize:  I will give away 100 free Pokemon or Magic Packs for parent-verified kids who make it through the whole week screen free. (or $5 off any game more then $20 for people who don’t play the collectible card games.)  I will give double packs to any kids of families who have a family game night on one of those nights, particularly if the family are all good sports!.

I know this is hard, super hard.  With the screens and devices, we’ve all gotten great at avoiding the feeling of being bored.  But bored is very important.  Bored is a gift that creates an itch to find something else to do. Here comes the newest set for Magic…Oath of the Gatewatch…the second set of 2 in the Battle for Zendikar block.  This set features a new set of mechanics that really favor playing with buddies (two-headed giants and such) as well as the first new land type in, well, ever. (Really just turning colorless mana into it’s own thing, but cool none the less) [from the Wizards Site]

The battle to save the plane of Zendikar rages on.

Confronted with overwhelming odds, the Planeswalkers face a dire choice: Retreat away to safety and leave the world to oblivion, or stay at great personal risk and fight for Zendikar.

Will you stay and fight?

To ring in the new year, we are doing a different magic event for every day starting the day after x-mas.

Bonus Raffle entry Tix for number of events you attend for the Friday FNM Goodie raffle.  Raffle items will include promo cards, playmats, Modern Masters Packs, a From the Vaults and more stuff.  The more people that come to events, the more we’ll stuff in the give away…

Update…the event was great.  They raised over $1500 for Children’s Miracle Network.  The Nerdy Knights were very, very cool guys and we were impressed both by what they were doing, and their spirit in doing it.  Great job guys…you are welcome to come back next year.  (Oh…and a shout out to my trivia team partner who helped prove that the combo of age and beauty turned out to be unstoppable…woo hoo!!!  And good job to the second place team who ended up being a couple of our regular kid players who snuck up from behind and womped on the mostly adult crowd!)

So here’s the scoop.  This group of players, who call themselves the Nerdy Knights contacted me to ask if we’d be willing to stay open for 24 hours to play games in the store.  After the echos of the initial laughter faded, it turned out that they do this every year as part of a nationwide event for an organization called Extra Life, that has groups like them all across the country do these game marathons to raise money for the Children’s Miracle Network to give money to a bunch of Children’s hospitals.  After making sure they were legit, I dusted off my cot and gave them the thumbs up.  Taking care of each other is a big part of what the store is about, and building in some taking care of others has been a goal of the

How this works.   From 6 am Saturday to the same time on Sunday, the Nerdy Knights will be here, playing games, streaming on the net and gathering donations.  Side by side with that we will be having tables dedicated to everything from Table-top board game Speed Dating, to Special Magic tournaments.  D20 will donate the space and games for use in the events.  Events with packs (ie Magic) the store do at a hugely discounted rate so any profit (and most of the $) will go to the charity.

Also, there ARE volunteer opportunities to help out.  These include Speed Gaming Game Masters (people who know some of the board games well and can help people get a taste of the game super fast), Twitch Chat Moderators, Sound Mixer Tech, Set-Up and Clean-Up, Promoters to help spread the word and bring in people. If we have the people, we’d love to set up table for folks to learn or improve at Pokemon and Magic on Sat am and afternoon who would then donate to the charity.  (And yes for some of kids/teens, this  does count as community service for those kids who need to do that for school. –Quick note…don’t just do this to check off a school requirement…do it because it is a good thing to do, and come prepared to really work.  We won’t sign off any forms for those who don’t come with their a-game attitude and do great work. )

The events (big time subject to change)  Check here for the latest updates and schedule.  NOTE…being here either before or during the after hours (after 9pm) is only for the volunteers or the participants in events. (Ok…you can donate a cover charge just to watch….whatever brings in more donations for the kidlets.)

Events for the public to Participate in so far:  (We will add more as we get more volunteers to run them.)
On Demand…

Zombie Conspiracy is A D20 homebrew special game.  We took Conspiracy, Wizards special multiplayer drafting set, and blatantly messed with the rules to make a game that is perfect for 3-6 buddies who just want to spend a couple of hours cheerfully womping the heck out of each other without all the waiting between rounds and not getting to play with yer buddies of regular magic.  Conspiracy was a cool idea, a draft format that not only was designed to play with 3-6 people all in one big group, but also had cards that messed around with the draft.

So here is the thing….We really liked the idea of Conspiracy…but when we played it there were a couple of things that just weren’t that much fun.

The first problem we found that was that as much fun as it was to play, if you spent all that time drafting a cool deck and got knocked out in the first ten minutes, it didn’t just make you “ah, I’ll get you back” mad, more the “don’t sleep with both eyes closed anymore, because I will kill you in your sleep” mad.  Second was what we call in Commander, the Fluffy Bunny Syndrome….people tending to hang out, doing their best “Don’t mind me, I’m just a harmless little bunny” impressions, trying to be the least threatening person at the table while waiting for enough stuff to come out to do their alpha strike.  Boring….

Enter Zombie Land—How our version works is that you get points for knocking out other players and if you are knocked out then, well, you rise from the dead and come back in.  We’ve played it a bunch and it works great.

What are the Cards?

The Mechanics of the new set